Dr. Steve Cook has practiced chiropractic in Fort Collins since 2010. Those closest to him know him to be an extremely caring individual who is passionate about natural health. He is dedicated to his profession, and loyal to his patients, family, and friends.

He holds an undergraduate degree in Natural Resource Conservation from the State University of New York at Morrisville in addition to his Doctor of Chiropractic degree from New York Chiropractic College in Seneca Falls, NY.

He spent his early 20’s working as a Land Surveyor. After experiencing a bit of wear and tear on his body and some serious soul searching; he wanted to find a profession that would incorporate his love of science, serve a greater purpose, and help people.

When he was 23, Dr. Steve sustained a lower back injury while camping near his favorite waterfalls in the Adirondack Mountains of New York. He experienced immediate pain relief and an overall better connection to his body after receiving his first chiropractic adjustment. It was soon after that he decided to pursue becoming a chiropractor.

Because of Dr. Steve’s own experience with good health and wellness through regular chiropractic adjustments, he has gained the kind of compassion that only comes through overcoming one’s own disabling pain.

In addition to his own health challenges, Dr. Steve watched his son go through debilitating eczema over the first four years of his life. Traditional medicine seemed to help at first, but after just a few months, his little body became intolerant to the steroids he had been prescribed and the eczema attacked with a vengeance.

Steve and his wife, who is an acupuncturist, took matters into their own hands. They made the decision to take their son off topical steroids and he began the long journey known as Topical Steroid Withdrawl – the devastating result that comes from the overprescription of topical steroids. Before doing so, they began chiropractic care and acupuncture amongst other natural healing modalities to support his body's healing potential as best possible. 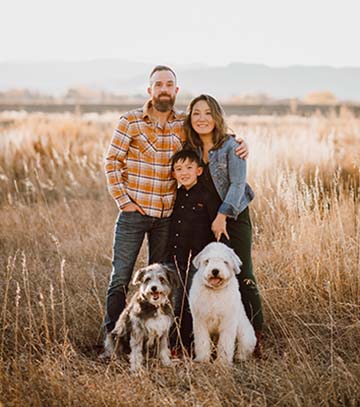 Today he is a rambunctious 6-year-old who receives regular chiropractic adjustments and no longer experiences eczema. Pediatric chiropractic care was not what healed his son. It was however the specific thing that ensured his nervous system could adapt better to physical changes as his body slowly healed over the course of four years. He also knew all healing is governed by the nervous system. And he was determined to see his boy through this. To this day, his son Owen was his most important patient ever.

Steve's family went through years of hell due to medical negligence. He now uses this as the driving force behind why he adjusts children and families – to help ensure they never have to suffer as his family did. He also continues to focus much of his continuing education on family-centered topics such as pediatrics and pregnancy care.

Upon passing their rigorous examination, he became an IVCA certified animal chiropractor. He now adjusts dogs inside his Fort Collins clinic, as well as horses across the state of Colorado. Dr. Steve initially decided to pursue his certification in animal chiropractic upon realizing there weren’t many options for sick and disabled animals aside from drugs, surgery, and very limited physical therapy.

It wasn’t until he began working as an animal chiropractor that he realized the true impact an unhealthy animal has on the entire family - including depression, anxiety, and financial burden. It turned out that by serving animals, he had also found another way to serve the needs of families in his community.

Dr. Steve and his wife, Jen, own a home in the country where they consider themselves recreational farmers. They have chickens, fruit trees, and a greenhouse that is planned for the future. Together they enjoy CrossFit, snowboarding, local outdoor festivals, being integrally involved in the Fort Collins community, and Walrus Ice Cream. Steve has a strong faith in God and is an avid outdoorsman. He especially enjoys hunting elk, deer, and bear with his brother several times a year. Dr. Steve has a passion to improve the lives of kids, adults, horses, and dogs through chiropractic care.